Australians love the idea of being at the top of buildings and bridges. It’s an grounded in unique locations, over-proportionate attention to personal safety, slick marketing, huge opportunities for commercial profit, and less cynically, the chance to do something unusual.  Depending on your age, interest and physical ability, it will range anywhere from “wow, that was one of the most thrilling adventures of my life!” to “wow, I can’t believe I just paid for… that?”  Here’s a handy round up of the bucket list options in Sydney, Melbourne, Adelaide, Gold Coast and Brisbane.

The most iconic climb in the country is one slick operation, capable to funnelling in full tour buses in one end and successful bridge climbers holding mementos out the other.   Processed through a series of efficient assembly line-like stages, you get suited, briefed and safely, attached, and then walk a series of ladders, gangways and arches. The view of the Opera House and the Sydney CBD is worthwhile, and if you’re a visitor, you’ll learn much from the running commentary about the city and history of the bridge. You can climb at dawn, twilight, night or during the day, with a variety of flexible packages designed to eliminate whatever excuse you have for not doing climbing atop the world’s largest steel-arched bridge.   Millions of people have done it, over 4000 couples have got engaged, and the oldest climber was 100 years old.

This one befuddled me with the fearsome language “Take on an Icon!” and redundant safety precautions.   Last time I checked you don’t have to strap yourself into a harness, cover your rings in medical tape, remove every object from your person, take a breathalyser, and wear an overall to climb up a ladder, or walk a gangway. It probably wasn’t fun dealing with the insurance companies on this one, who surely imagined every conceivable scenario of the silliness one could get up to on a stadium roof. The Oval is fetching, particularly if you take the tour and spend the extra dough during an AFL or cricket match. Spending a few minutes on the seats overlooking the pitch is total bucket list. I did a 2-hour Twilight climb, watching the Riverbank light up and the fruit bats fly across the city.   All I could think of was a: do we really need all this safety stuff, and b: it would have been great to have done this on a game day.

Queensland’s Gold Coast is has long sandy beaches, and squirmy canals that shape the city’s character.   The best place to see them is from the Q1 Observatory, and better yet stepping outside for the highest external building climb in the country.   I followed the typical routine as dictated by the stringent requirements dreamed up by the geniuses of insurance liability: light jump suit, safety harness, breathalyser, cameras and phones in a lock box. There’s points for the high-speed elevator that gets you to Level 77 in just 42.7 seconds. From the Observatory, it’s 140 steps up a walkway to the summit, safely locked into a railing. Here you can lean over the beach of Surfers Paradise, gaze down a 270-metre vertical drop, and wonder why no-one is climbing to the top of the other tall buildings that frame the coastline. It’s a 90-minute experience (including the safety briefing stuff) and your ticket includes access to the less exposed but just as scenic Observation Deck.  You can read more about SkyPoint adventure here.

The Eureka Skydeck is another observation deck, boasting the fastest elevator trip in the southern hemisphere, and floor-to-ceiling 360-degree views of the city from 285 metres above the ground. There’s an outside area to grapple with Melbourne’s erratic weather, a kiosk, some befitting touristy-things. Recognizing its lack of edge in the thrills department, Eureka also offers The Edge, a moving glass cube that extends out the 88th floor and suspends above the city. Anchorman Ron Burgundy might say you’ve been trapped in a “glass cage of emotion.”   My young kids didn’t have any scary problems when the glazed windows cleared (with a sound effect crack for good measure) to reveal Melbourne beneath their feet. Then again, they are my kids.   Couples have been known to propose and those with a fear of heights, well, shouldn’t be doing stuff like this in the first place.

Brisbane’s storied landmark is the only bridge climb that lets you abseil your way down. The three-hour tour operates at dawn, dusk and twilight, and lets you scale to the top of the Story Bridge for 360-degree views of the twinkling city, the Glass House Mountains and south to the Scenic Rim. Suitably impressed, you’ll head over to the southern pylon for a thirty metre- abseil down into Captain Burke Park. The adventure, of course, is tailored for ’bucket list enthusiasts’. 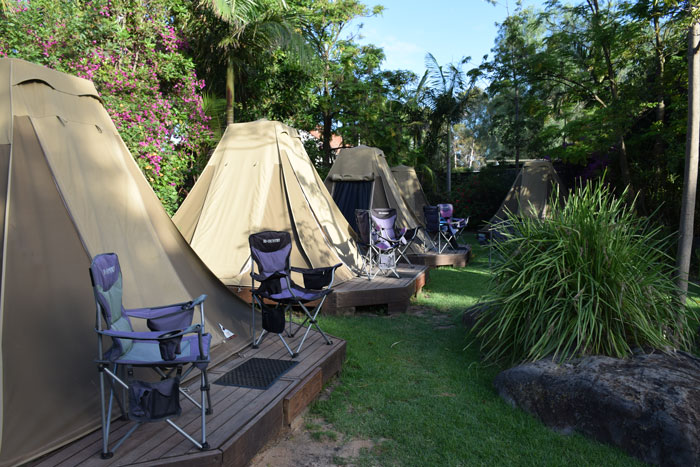 Several zoos offer an overnight experience. Parents and kids get to:

Melbourne Zoo gets some 10,000 visitors a day, and all of them have gone home when my daughter and I pull into the parking lot at 6pm. The gates are still shut, and knowing the assortment of wild animals that reside within, it feels like we’re in the opening credits of a Hollywood movie, the kind where things go awry and lions escape their cages and start picking off overnight tourists one-by-one. To be fair, young kids will be less concerned with the animals and more freaked out about the dark, since they rarely spend much time in it, much less roaming around an empty zoo to a soundtrack of grunts, hisses and squeaks of animals. The service gates open, and our group of just over a dozen Roar n Snorers are greeted by Jacky and Katheryn, our two friendly hosts for the evening. They’re fun and enthusiastic and superb female role models for Raquel. We drive our vehicles into the service area – backstage at the zoo – and are shown to our safari style canvas tents on raised wooden platforms. Shaded by palm trees and within earshot of various animal calls, our tents – named after former and current zoo elephants – are surprisingly roomy, with sleeping bags, pillows and air mattresses. We’re advised to keep the tents zipped unless we want to cuddle a possum, which I have to remind my daughter, is not something we actually want. Having dropped off our bags, we’re led on a behind-the-scenes tour of the zoo, learning about the animal diets (did you know the animals are fed veggies provided by grocery stores?) and the old heritage-listed buildings that now function as storage facilities. All this entrances the older kids in the group, but my kid just wants to see the animals. Fortunately, the red panda is up and about and eager to say hello to us as we use the public bathrooms a short walk from our tents. With fruit bats flying overhead, we’re free to wander about as our hosts prepare BBQ’d burgers and chicken, served with salads and corn in a former elephant enclosure. 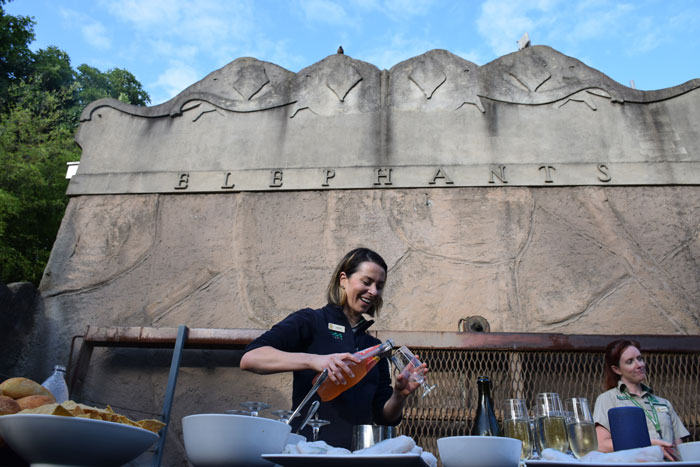 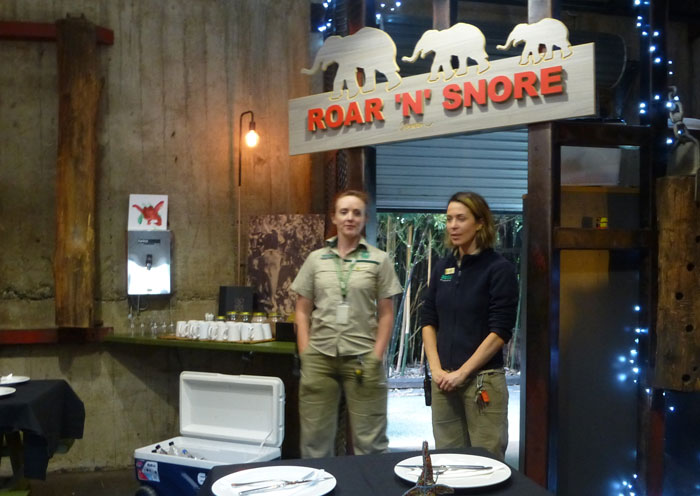 I wonder if the smell of grilled meat drives the carnivores crazy. Satiated, any sign of my daughter getting tired quickly dissipates as we grab our headlamps and head out for a nocturnal walk in the zoo. Animals are always more lively at night, especially in summer. We hurl apples and pears to the elephants, greet the hyperactive Bolivian, squirrel monkeys, and learn that it’s best to keep your distance from the one-eyed tapir. We pet a tortoise and a python. Along the way, our hosts tell us great stories about the animals and reveal the inner workings of the zoo. Melbourne Zoo uses a category system where animals are rated between 1 and 5 to determine how dangerous they are. A tiger is a 1, but so is a peccary. At the lion enclosure, a juvenile male is particularly active and jumps up suddenly against the thick glass viewing area. As the smallest and therefore most vulnerable member of our group, my daughter clings to my neck for the remainder of the walk. It’s dark, it’s late, it’s a little spooky, and it’s time to go to bed. 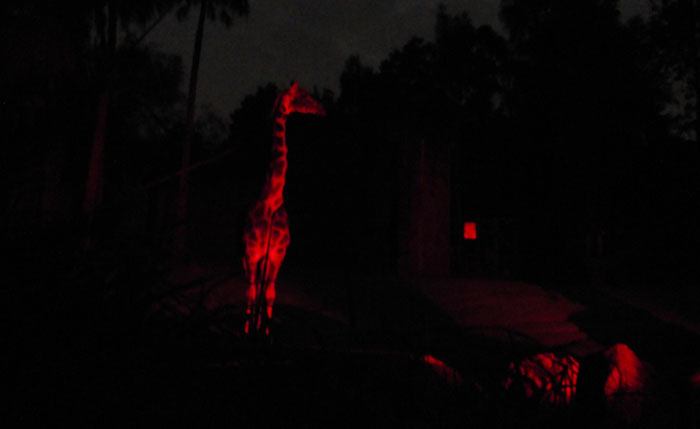 Milk and cookies are the reward back at our camp. Parents with kids who run on a tight schedule might struggle with the late bedtime, but since my daughter rarely sleeps anyway, we’re up at 11pm as she thrashes about in the sleeping bag we’re inevitably sharing. Older kids are having a much easier go of it, and personally I enjoy hearing the sounds of the animals at night, presuming they’re not the sounds of the young couple enjoying a romantic weekend adventure in their adjacent tent. We wake up, pack up, enjoy breakfast, and take a pre-opening excursion to hand feed the giraffe, and watch the zookeeper feed the penguins. Our ticket includes admission to the zoo the following day, and so we retrace our steps in the early morning sun, before the zoo opens for business. 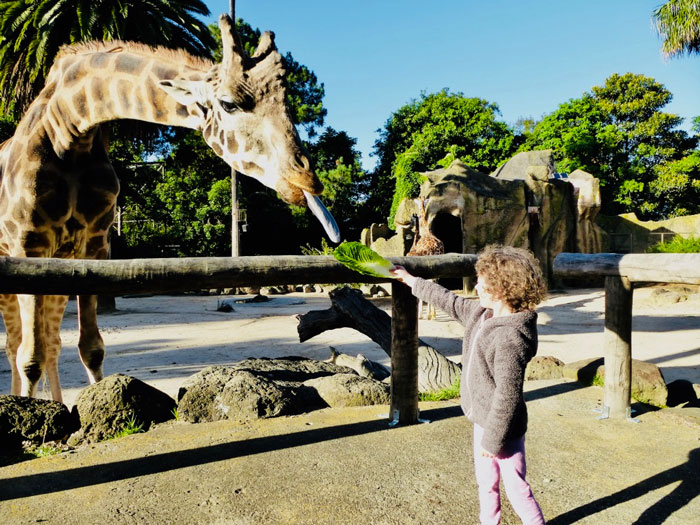