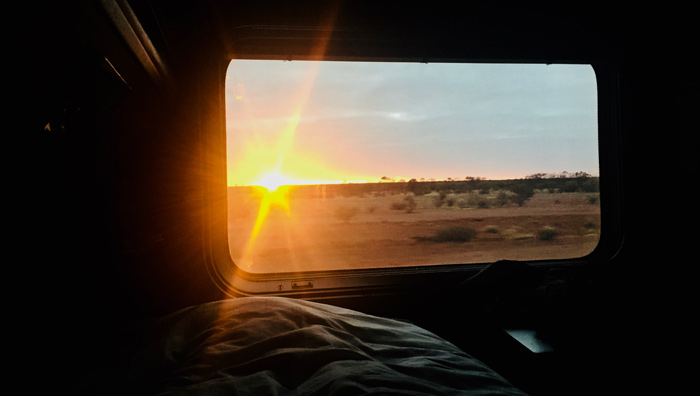 My cabin is as comfortable as any you’ll find on a train, the bed adorned with soft sheets and pillows, and still I cannot fall asleep.   Too much on my mind, too much to process from a day exploring remote underground homes in the world’s opal mining capital, too much fun at the open bar aboard The Ghan. I typically read before bedtime as a way to put my mind to rest, but tonight my eyes are too tired to stay open, and my brain too wired to close. It would be great if someone could read me to sleep, with a safe and soothing voice. As for the story, it should be deliberately and delicately crafted to avoid anything too exciting, and take me on a peaceful journey to Sleepland.   Just so happens that Phoebe Smith, soon to be the official sleep storyteller-in-residence for the Calm mindfulness app, is in the cabin right next to mine.   I’m sure she’s sleeping like a baby.

With over 40 million downloads, 200,000 5-star reviews, and Best App of the Year Awards from both Apple and Google, the Calm app has hit a cultural bulls eye with sharpened z-shaped arrows.   It’s loaded with meditations, ambient music and soundscapes, and dozens of sleep stories narrated by folks like Matthew McConaughey, Stephen Fry, Joanna Lumley, and The Wire’s Clarke Peters, who has richer Morgan Freeman voice than Morgan Freeman himself.   Millions of satisfied subscribers swear that Calm does exactly as its very name suggests: it calms you down, whether you set-up an easy 15-minute Focus or Anxiety meditation, a fiction or non-fiction story to lull you to sleep, or soothing sounds to massage your ear canal.

“Two million people a month listen to my stories, it’s mind-blowing,” Phoebe tells me. “I admit I was sceptical, until I listened to one of my own stories and quickly fell asleep.” A year has passed since our Ghan adventure across Australia, and she’s in Vancouver on her way up north to to explore the Khutzeymateen Grizzly Bear Sanctuary. Since we ran about Alice Springs trying unsuccessfully to get an epic author photo for my next book, she’s been called the JK Rowling of Sleep Stories, has been profiled in major media, and fine-tuned her craft. We’re in the lobby bar at the Hotel Vancouver, and having just flown in from Brisbane that morning, Phoebe looks like she could use a little sleep herself.   Isn’t a 14-hour flight and 17-hour time the enemy of the well rested?   “Honestly, travelling with my own pillow has been a game-changer. Your brain associates the scent of your pillow with sleep, and it really works!”  It pays to listen to someone who makes a living devoted to sleep.

Back in the UK where she lives, Phoebe is known for her books and stories about sleeping in unusual, extreme and wild places. I quite like the fact that Calm didn’t hire a scientist or psychologist to methodically bore you to sleep, but rather a storyteller. “Storytelling is such an old tradition, it’s how knowledge and wisdom has been passed down throughout history,” says Phoebe. But hang on, aren’t you essentially writing stories so boring it puts people to sleep?    “As a kid, you didn’t want a boring story, but there’s definitely a technique involved. There can’t be too much action or excitement, and it should take you on a journey, which is why trains, boats, rivers and forests work so well.   Feedback suggests that most people fall asleep within five to ten minutes, but I get lots of emails from people around the world wanting to know more about the places I write about.”   Places like the lavender fields of Provence, the jungles of Madagascar, the Mississippi River and the forgotten forests of Morocco. There are travel stories about oceans and deserts, safaris and night skies. There are train journeys aboard the Orient Express, the Trans-Siberia, and yes, our adventure aboard The Ghan.

We both agree that stories are a far healthier alternative to medication and sleep aids.  “These days, we often treat sleep as an inconvenience,” Phoebe explains. “There’s so much going on and instantly available that we can’t switch off, which only adds to the anxiety.”   It’s why she turns off her devices at least an hour before bed, keeps her bedroom free of distractions, and is passionate about sleeping in the wild. “When it gets dark, you sleep, and when the sun rises, you wake up. It’s the natural rhythm of our bodies, and it makes you feel calm and rested.”   Unlike Phoebe, the very thought of sleeping outdoors, exposed and alone on say, a mountain top, freaks my poor brain out. So I’ll ignore her advice and keep my iPhone handy, ready to load up a Calm sleep story, and let her words inspire a blissful lullaby.