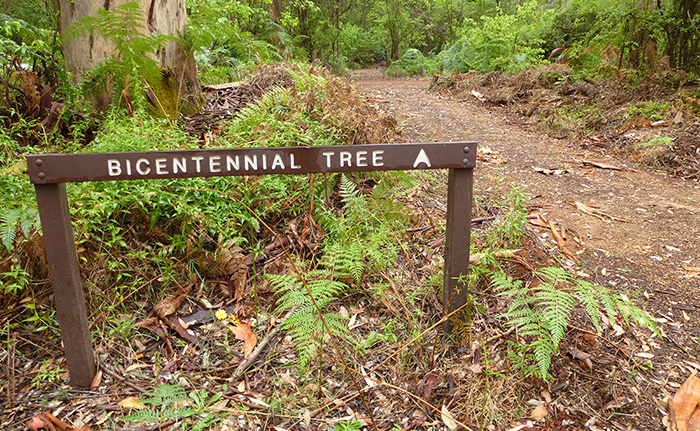 Thin metal rods are poking out a giant tree, spiraling up and up (and up) towards a wooden platform, 75 metres in the Western Australia sky. These karri trees are amongst the tallest hardwoods in the world, and this particular tree, the tallest in the forest, was once used as a fire lookout for any trouble smoking in the forest.   It seemed like an innocent enough roadside attraction, just 15 minutes drive from the town of Pemberton, where I had refueled on gas and a beef pie.   I had wandered into Warren National Park out of curiosity, captivated by a sign directing visitors to the Dave Evans Bicentennial Tree. Playing on my iPod was U2, which in a very strange way, was a sign of perfect synchronicity.   Dave Evans is the real name of guitarist The Edge, and his namesake tree, a pure coincidence, seemed destined to deliver the same.

At the top of this lookout tree stands a large platform weighing two tons.   To get there I would have make my way up 130 erratically staggered thin black rods, thrusting myself up between ever widening gaps.   From the bottom it looked harmless enough, because I couldn’t see just how high I had to climb. I started eagerly, one pole at a time, a little unnerved by a very thin wire safety net which looked like it could maim more than save. It didn’t take long before I looked down, and my knees began to feel as wobbly as a Central African government. 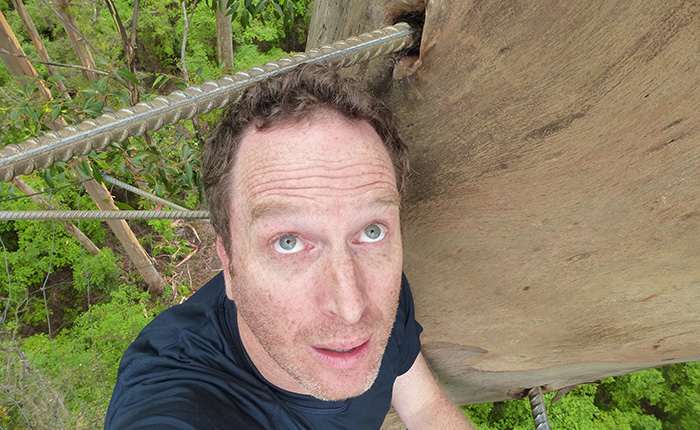 It was one of those beautifully dangerous things I love about Australia, where the world’s most poisonous snakes and spiders might be living in your pillow.  I read an actual headline that week: “Man Breaks Leg Kicking Spider”.   The dry rolling countryside is rife with critters, while the long sandy beaches expose you to a strong sun that can bake you in seconds.   Still, this is gorgeous country, with a big sky, small population, and striking eucalyptus forests leading up to the country’s premier wine region, Margaret River.   25m above the ground, I realized that whoever built this tree path must have had one too many drinks. I was clutching onto the thin poles so tight my muscles were cramping, my toes clenched so hard you could crack a bullet between them.    Higher and higher, and just when I was sure I might absolutely wet myself with fear, I arrived at a small wooden platform. A truly unhelpful sign read: “That was the easy bit, mate!”  Aussie, oy, oy oy vey. 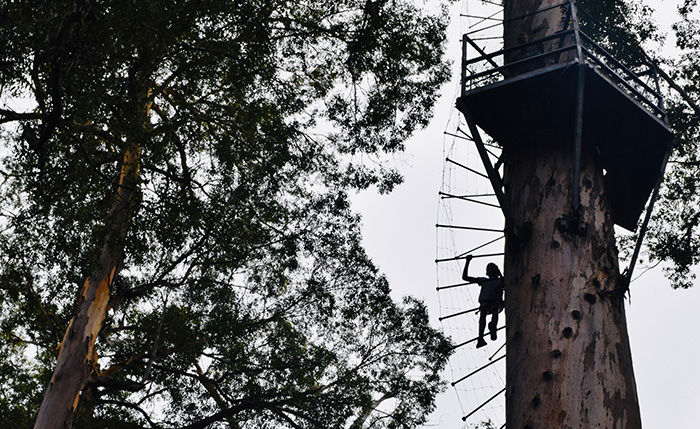 A sturdy tanned Australian fellow crawled down from above, drenched in sweat.    “C’mon mate, once you’re this far, you may as well go all the way to the top,” he said, in that typical Australian drawl which makes any stranger seem like a good ol’ buddy.     It encouraged me to continue my climb, cursing the damn Australian sticky flies, relentlessly exploring my nostrils and ears.  I reached another rest platform, and another, and then another, until at last, I was on top of the tree, dripping in sweat, staring out above the lush forest in all directions. The sea cast a blue glow in the distance.   My knees were still swaying, but that might have had something to do with the tree itself, dancing to a gentle ballad in the wind.   During strong wind, the tree can sway 1.5 metres in either direction. 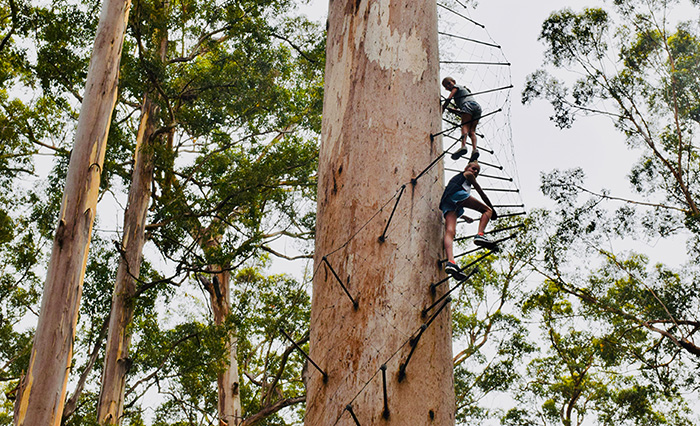 Cautiously, I made my way down, wondering why they don’t sell T-Shirts at the bottom of trunk:  “I survived the Dave Evans Bicentennial Tree.” I wondered how many people had slipped. I wondered if the safety net worked. I wondered who Dave Evans was, and whether he was the unfortunate chap who could answer both questions. Assuming the latter was affirmative.

The ordeal took an hour, far scarier than any tree I had ever climbed.  There wasn’t even an official around to call an ambulance should you drop out the sky, all the way to hell, do not stop and collect your broken bones.   If there was, he might tell me “it’s just a big tree, mate. We have spiders bigger than this.”